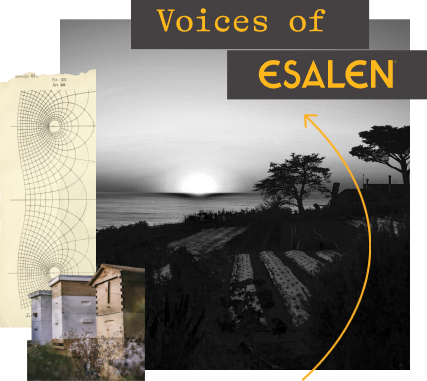 These podcasts are made possible in part by the support of Esalen donors and are licensed under a Creative Commons BY-NC-SA 2.0 license.

Listen to the latest episodes here, and subscribe to Voices of Esalen on Spotify, Stitcher, Soundcloud, Apple Podcasts or Google Podcasts.

D’Lo is a queer/transgender Tamil Sri Lankan-American actor/writer/comic whose work ranges from stand-up comedy and solo theater to plays, films, short stories, and poetry. His acting credits include: LOOKING, TRANSPARENT, SENSE 8, Mr. ROBOT and Issa Rae-produced MINIMUM WAGE. His solo show “To T or Not to T” premieres June 25th at the Kirk Douglas Theatre in Los Angeles.

Together we talked about trans masculinity and what it’s like being a trans man in a world dominated by toxic masculinity, his relationship with his mother and father, his journey from gender nonconforming to someone who passed as male, what cis gender folks should never EVER ask about being trans, who he makes his work for, what solo performers inspire him (Whoopi and Leguziamo!), how hip hop was his ally, how he became politicized as a kid growing up in Lancaster, California, and what is his secret superpower as a comic.

Mary Sanders is a founding board member of the People of Color Psychedelic Collective, an organization that provides psychedelic education to historically marginalized communities in order to foster empowerment and healing. She is a licensed psychotherapist who specializes in exploring the depths of transgenerational trauma and, in her words, peeling off layers of oppression and cultural conditioning. She is certified in psychedelic-assisted therapies and believes that plant medicines can serve as tools to effectively heal trauma.

During our discussion we talked about her experiences as the only black person in psychedelic circles, and what constitutes a safe space for her as she attempts to explore her own healing. We also touched upon what kind of barriers have to be dismantled for BIPOC folks to access psychedelic-assisted therapy, why there’s often an earned skepticism in communities of color around psychedelics studies, how the war on drugs has affected people who might seek psychedelic therapy, what trends in psychedelic research and psychedelic training education she finds especially intriguing, and what she wishes a majority white populace might do to create a more easeful experience around psychedelic healing for folks of color.

Senti Sojwal and Tiffany Diane Tso are founding members of the Asian American Feminist Collective, a grassroots racial and gender justice group that works to interrogate and dismantle systems of racism, patriarchy, and capitalism, telling their stories through various modes of feminist media while providing spaces for identity exploration, political education, community building, and advocacy.

In our conversation we explored a host of topics, including the legacy of feminist activism that undergirds their work, the intersectional identities that inform the AAFC, how Black feminist thought has influenced them, their hashtag #ThisisAsianAmerica (on Instagram), how reproductive justice is key to understanding how colonial power functions, what tokenism is and how it differs from genuine inclusion, and how allyship can actually work in a useful, non-performative way. In their words, Asian American feminism in an ever-evolving practice that seeks to address the multi-dimensional ways Asian American people confront systems of power at the intersections of race, gender, class, sexuality, religion, disability, migration history and citizenship status.

Check out their amazing zines and resource page:

Today we celebrate Bicycle Day, a modern semi-holiday (unrecognized by official governmental agencies yet observed by psychedelic enthusiasts across the globe) that commemorates Swiss chemist Albert Hoffman’s bike ride home from his lab on April 19th, 1943, after ingesting 250 micrograms of lysergic acid diethlymide, and in the process creating the world's first recorded intentional LSD trip. When Hoffman originally synthesized the compound in 1938, in the Sandoz Pharmeacuticals laboratory in Basel, he had deemed it next to useless, and put it up on the shelf to be forgotten — but five years later, something within him told him to take a second look. The rest, as they say, is history.

Today’s Voices of Esalen episode is a treasure drawn from our extensive archives — an interview with Albert Hoffman himself, conducted by none other than Stanislav Grof, sometimes known as the godfather of LSD psychotherapy. Grof was a Czechoslovakian psychoanalyst who was enormously influenced by Hoffman’s discovery of LSD; in his research in Czechoslovakia he oversaw tens of thousands of supervised therapeutic LSD trips. Grof would emigrate to the United States in the late 1960’s, a move precipitated by the Soviet invasion of his country. Grof spent more than ten years as a teacher in residence at the Esalen Institute during the 1970’s and 80’s, where he developed the practice of holotropic breath work and became one of the founders of the school of transpersonal psychology.

In this interview, Grof and Hoffman explore a host of topics, including Hoffman’s discovery of LSD and how on his first trip, Hoffman freaked out and thought he was going insane, then thought he was dying; how Hoffman then became aware that his new discovery would have immense significance to the field of psychiatry; why Hoffman believed LSD could be used as a model psychosis and a way to study schizophrenia; how Hoffman collaborated with amateur mycologist R. Gordon Wasson to create a synthetic version of so-called magic mushrooms, which would be known as psilocybin; how Hoffman traveled to Mexico to deliver this modern version of mushrooms to the famed curandera Maria Sabina, who had introduced Wasson to the mushrooms in the first place, and more. They end this interview by speaking about Hoffman’s reaction to the way LSD escaped the laboratory and infiltrated culture during the turbulent 1960s.

This interview was conducted at Esalen Institute in 1984 — just one part of the ever evolving and complex tapestry of history that unfolded here in Big Sur.

Laura Mae Northrup is a somatic psychotherapist, educator, podcaster, and author. Laura has been a guest on this show before, in 2020, when we discussed her podcast "Inside Eyes", a one-season tour de force that focuses on people using entheogens and psychedelics to heal from sexual trauma. She is now the author of a new book, Radical Healership: How to Build a Values-driven Healing Practice in a Profit-Driven World. Northrup views healing work and healing practitioners through a spiritual and political lens, as they do battle with the forces of capitalism while attempting to heal their clients and take care of themselves, all at the same time.

Find Laura on the web at www.lauramaenorthrup.com.

Xochitl Ashe is a Medicine Woman in the Peruvian Andean tradition and has worked with sacred plant medicines since the time of her initiation. At 16 years old, she became the first female of five generations of men to be initiated into the healing traditions of her Peruvian ancestral lineage. Xochitl is the founder of an Indigenous women-owned retreat company that offers legal Mazatec Psilocybin Mushroom Retreats in Mexico. Her mission is to honor the traditional indigenous knowledge and ceremony of sacred plant medicine to provide authentic and powerful life changing experiences.

Ismail Lourido Ali, J.D. is the Director of Policy and Advocacy at the Multidisciplinary Association of Psychedelic Studies (MAPS). Ismail advocates to eliminate barriers to psychedelic therapy and research, develops and implements legal and policy strategy, and supports MAPS’ strategy, organizational development, and ethics work. Ismail is a founding Board member of the Psychedelic Bar Association and also presently serves on the Board of Directors for Sage Institute in the California Bay Area. Ismail advises, is formally affiliated with, or has served in leadership roles for numerous organizations in the drug policy reform ecosystem, including Students for Sensible Drug Policy, Chacruna Institute, and the Ayahuasca Defense Fund. In addition, Ismail works with clients on legal matters related to the religious use of psychedelics as sacrament.

Together we talked about the remaining legal hurdles before MDMA-assisted therapy is FDA approved, why state legislatures (like Texas!) are beginning to experiment with psychedelic policy, why the DEA just proposed adding five more psychedelics to the list of Schedule 1 controlled substances, and much more. Great interview, great guy, so much to learn.

Dr. Adele Lafrance is a clinical psychologist, research scientist, and a leader in the research and practice of psychedelic medicine. Currently, she is the clinical investigator and strategy lead for the MAPS-sponsored MDMA-assisted psychotherapy study for eating disorders and a collaborator on the Imperial College study for psilocybin and anorexia nervosa.

We talked about her history as a clinician, and why she believes psychedelics may offer a different and perhaps more successful way of treating eating disorders than traditional methods. We also spoke about a system she developed known as emotion-focused family therapy. Dr. Lafrance believes emotion-focused family therapy can used effectively in conjunction with psychedelic therapy to treat eating disorders.

"All of these sort of regular things that biotech companies do, like snapping up patents so that they can get investor dollars moving forward, they’re intersecting with this culture in the psychedelics world, which is sort of anti-ownership. These forces will clash. They oppose with one another.” –Shayla Love, Vice Media

Shayla Love is a senior staff writer at Vice Media whose writing has appeared in The Washington Post, The Atlantic, Harper’s Magazine, The Guardian, and more. Her recent focus has been the field of psychedelics and how they exist and interact with the forces of what some refer to as late-stage capitalism. Shayla discussed whether there is a way to corporatize psychedelics responsibly, who has the most to gain in the new landscape of psychedelic capitalism, why the for-profit entity known as Compass Pathways attempted to patent a form of synthetic psilocybin, how and why the accompanying challenge to this patent from a group called FTO, or Freedom to Operate, originated, whether state decriminalization of psychedelics is at odds with federal medicalization, and more.

Payton Nyvquest is Co-founder and CEO of Numinus, a for-profit psychedelic company based in Canada that empowers people to heal and be well through the development and delivery of safe, evidence-based psychedelic-assisted therapies. Payton has more than 15 years experience working in finance, investment and retail banking. He pivoted to the emerging psychedelics industry not long after ayuasahca helped him experience deep relief from a lifelong battle with chronic pain. At Numinus, he guides teams in strategy, innovation, research and clinic network expansion and is responsible for raising more than $70 million for Numinus in the past year.

Together we talked about the difference between a for-profit and non-profit psychedelic organization, how he works in conjunction with MAPS, the Multidisciplinary Association for Psychedelic Studies (which is a non profit), how he sees psychedelic services intersecting with existing health care protocols in the united states, why Numinus is a publicly traded company, why he believes his company’s stock price will rise, and how being a father to a young child has influenced the direction his life has taken.

Listen on Soundcloud
Listen
Next

Join us for a free webinar on May 10:
Tap Into Your Unshakeable Trust with Alchemic Yoga Practices
‍
Learn more‍