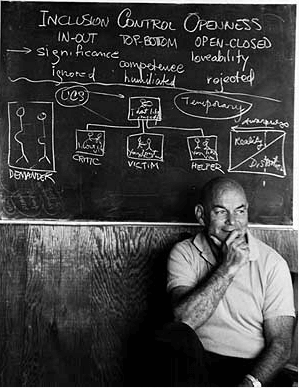 On November 9, 2002, Will Schutz passed away. Schutz, an extraordinary man who was at the height of his powers during remarkable times, was arguably the most important figure of his day for placing Esalen and the human potential movement front and center on the world stage.

Will Schutz arrived at Esalen in 1967 as one of the brightest and fiercest young lions in the world of psychology. Trained at UCLA as a social psychologist, he was fascinated by groups and immersed himself in studying, participating, and working with them, from group-dynamics research to T-groups to an eclectic form he developed himself and called open encounter, a combination of group therapy, pyschosynthesis, bioenergetics, psychodrama, Gestalt, and anything else he deemed appropriate in the moment.

By the time he came to Esalen, he had already completed teaching stints at the University of Chicago, Harvard, Berkeley, and the Albert Einstein School of Medicine in New York. But the rigid conventions of academia didn’t feed his imagination. As he wrote in The Human Element:

“I longed for an environment where I would feel stimulated and excited and motivated to use my creativity. So, even though I had just been promoted to associate professor at the Einstein Medical School—a coup for a nonmedical doctor—my heart was elsewhere. As I pondered alternatives, I recalled an offer made by a man named Michael Murphy.

“Michael had started something called a growth center, the Esalen Institute, at Big Sur, California. He made me an unusual offer. He said he could not pay me, but I could offer three workshops, and if anyone came I would make some money. He could not provide a place to live; there was a garage where I could put a sleeping bag.

“But he could give me a title, any title I chose. I found this offer irresistible, and so I became the Emperor of Esalen (in my own mind)….I resigned from Einstein, got divorced, put my belongings in a Volkswagen, and headed west to Big Sur.”

‍
Before heading west, Schutz had completed Joy: Expanding Human Awareness, a guided tour through his collection of open-encounter methods and techniques. The book spoke plainly about simply feeling good, and its compendium of practices for finding joy struck a chord with the American public.

The book became a surprise best-seller and Schutz spent a good part of 1967 traveling the talk-show circuit touting the virtues of honesty and open encounter. In the process, he made encounter groups synonymous with Esalen.

Back in Big Sur, he headed Esalen’s burgeoning residential program. Schutz practiced what he preached. He was straightforward, he asked for what he wanted, he expressed his feelings, and he told the truth. He was a powerfully built man, confident, forceful and funny. He could be intimidating, too, and his rivalry with Gestalt godfather Fritz Perls was legendary. Perls snidely referred to “joy boys” and “turner onners,” implying that Schutz was more interested in showing people a good time than prompting them to truly face themselves.

But these two teachers who were so prominent as Esalen’s public voice shared more common ground than either would admit. They both railed against the repressive culture that they felt prevented people from honestly expressing themselves. Both men had an instinct for instantly spotting resistance and quickly bringing people’s underlying feelings to the surface. Both were influenced by Wilhelm Reich and believed that emotions were reflected in the body. And both felt that too much thinking obscured authentic feeling.

Schutz trusted the group process and the principle that one’s characteristic ways of relating will come out in every social setting. The goal was to recover deadened feelings and increase a person’s ability to be open and honest.

Schutz’s intellect, curiosity, and appetite for experience were prodigious. In addition to his impressive academic credentials, he spent six hundred hours in psychoanalysis, one year in bioenergetic therapy, took both the est basic training and the forty-day Arica training, had forty-three rolfing sessions, and trained in acupuncture and Feldenkrais theory.

Schutz lived at Esalen from 1967 to 1973. It’s clear that he would have shone in any context. Prior to coming to Esalen he developed FIRO (Fundamental Interpersonal Relations Orientation), a system still in use for classifying how people orient toward others.

After leaving Esalen, he developed The Human Element, a guide to enhanced performance and improved organizations through the development of healthier self-concepts, self-determination, and openness. In all, he wrote eight books and influenced countless students, seekers, imitators, and acolytes. It is difficult to overestimate his impact on Esalen and on our culture at large.

Will Schutz was a giant.

Several years ago I was on the Tonight show with Johnny Carson, promoting my book Joy. I was delighted to be a celebrity and to bring to the masses the word about the marvelous techniques I had collected and created. I had
a whole arsenal of new methods, mostly nonverbal.

Carson was intrigued. He gave me thirty minutes on the program, so I had a chance to show how to express anger by pounding on the mattress along with Carson, Ed McMahon, and the guests—everything I had hoped for. Then we had three minutes left, and he asked me what else I did in encounter groups.

“ We tell the truth,” I replied. I felt the main show was over and now we just would do a short filler and go home.

“ Well,” I said, “it seemed to me your singer tonight giggled quite a lot and I thought it annoyed you. You winced a few times. If this were a group, I would invite you to tell her directly instead of holding back and keeping yourself more distant from her.”

After a few denials, Carson acknowledged he did have a slight feeling of that kind once. At my suggestion, he told her directly.

“ Oh, I’m so glad you told me,” she gushed. “I thought you felt that way and I’m delighted to hear you say it.” With that, they exchanged warmth and the show ended happily.

The next morning, on the streets of New York, I was stopped by at least a dozen people who had seen the show and, to my astonishment, every one of them commented only about the truth episode.

At first I was chagrined. Here I had demonstrated all my wonderful new methods and apparently no one cared. Their response was to the simple fundamental of encounter—honesty.

“Been watching Johnny Carson for four years, and that’s the first time I’ve seen him real,” was the tenor of their comments. They felt they had come to know their long-time acquaintance, simply because he had been honest.


The Way it Was

Will was both our leader and our colleague. He formed a team to lead his More Joy workshops—five-day rock ’em, sock ’em encounter groups he had created. He trained us, supported us, sat in on the groups that we led, and always pushed us further.

It was the beginning and there were few rules then. Opening night we would raise the discomfort level so as to forecast the underpinnings of the five days to come. There are no secrets here, we implied. Do it, don’t talk about it, we modeled.

One of my favorite openers was Will’s exercise, the High School Dance, with “boys” on one side and “girls” on the other. One by one, with everyone watching, you had to walk the length of the gallery, stand in front of your desired dance partner, and ask them to dance.

You waited interminable seconds for them to respond and, if accepted, stood next to them with an inner sigh of relief; if rejected, you walked the plank back to your side of that long, long room, again, with everyone watching.

Those secret high school humiliations, victories, jitters, longings, and losses stared you in the face as years later you once again gathered the courage to ask and reject and ask and reject again.

Will’s groups were tough and freewheeling and the culture supported him. This was the ’60s: women’s lib was well on its way, the Vietnam war was in full force, the hippie movement abounded. Break the rules! was the cry of the culture, and Will took this cry into the inner world. Transference? What’s transference? Mommy and Daddy? The people you chose to be born to. Behaviorism? Fascism. Freud? Who he?

No longer were groups held sitting on chairs; we all sat on the floor! When people sobbed, you passed the Kleenex, but you also held them—a daring move. Although the groups were indeed at Esalen (a living paradise that felt to be the edge of world—the vast mysterious ocean before us, the mountains behind us pushing us forward), they were still very much part and parcel of the culture.

Will’s work was of the bigger revolution going on around us. We used to call what was going on outside of Esalen the “revolution,” and what we were doing “evolution.” Inflated as it may well have been, it spoke to Will’s ability to be both part and apart of his time.

Will was a synthesizer. His groups used techniques and ideas from burgeoning practitioners and contemporary thinkers—Maslow, Huxley, Mead, Feldenkrais, Rolf, Perls, Lowen, Satir, and more.

And he was a pioneer. Nobody before had envisioned the group context in which these new practices could catalyze and complement one another to produce such astonishing experiences.

Will Schutz was our Captain Kirk. He was the captain of a great adventure in special times and I miss him terribly.