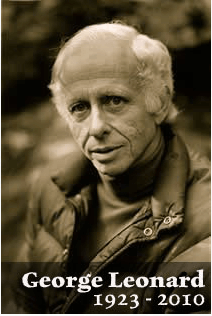 George Leonard, president emeritus of Esalen Institute and one of the giants of the Human Potential Movement through the second half of the 20th century, died peacefully at his home in Mill Valley, California, surrounded by friends and family, on January 6, 2010. Often called the "third founder" of Esalen for his decades of leading contributions to the Institute and its work, George Leonard was one of the leading voices of the past two generations in shaping American culture and our world today.

George's fertile legacy will live on in his beautiful family, his contributions to public journalism and social change, his 12 books which continue to spark programs and trainings today, his founding role and research (with Michael Murphy) in the programs of Integral Transformative Practice, which have changed thousands of lives over the years—and in the transformational work and mission of the Esalen Institute in Big Sur, California and around the world, which he labored so long and creatively to nurture and to inspire.

Here at Esalen, we will miss George's sparking, challenging presence, his amazing physical discipline, his endlessly energetic spirit, his inspiring example of the active creative life into his ninth decade, and his constant reminders that, as he liked to put it, "every idea, every intention, every new thought is a new generative form in the universe," and that as human creators, we are tapping and manifesting only a small part of an unlimited potential for imagination, transformation, and social progress.

The following biographical sketch will give you a few highlights of his exemplary creative life and spirit.

George Leonard co-founded Integral Transformative Practice (ITP) with Michael Murphy. He was the author of numerous books on human possibilities and social change, including Education and Ecstasy, The Transformation, The Ultimate Athlete, The Silent Pulse, The End of Sex, Mastery, andThe Way of Aikido. The 1995 book, The Life We Are Given, co-authored with Murphy, reports on a two-year experimental class in ITP created by the authors for realizing the potential of body, mind, heart, and soul. ITP Groups are now practicing not only throughout the U.S., but in other countries as well.

From 1953 to 1970, Leonard served as a senior editor for Look magazine. He produced numerous essays and special issues on education, science, politics, the arts, the Civil Rights Movement, and foreign affairs. A collection of his Look essays was published in 1970 as The Man & Woman Thing and Other Provocations. His articles on education won eleven national awards. Articles by George Leonard also appeared in such magazines as Esquire, Harper's, Atlantic, New York, Saturday Review, and The Nation.

Leonard held a 5th degree black belt in the martial art of Aikido, and was the co-founder of an Aikido school in Mill Valley, California. He was also the founder of Leonard Energy Training (LET), a practice inspired by Aikido, which offers alternative ways of dealing with everyday life situations. Leonard introduced LET to more than 50,000 people in the U.S. and abroad.

George Leonard received a Bachelor of Arts degree from the University of North Carolina (1948) and Doctor of Humanities degrees from Lewis and Clark College (1972), John F. Kennedy University (1985), and Saybrook Institute (2003). He was a past president of the Association for Humanistic Psychology; during his tenure, the Association's membership reached its all-time high. He was President Emeritus of Esalen Institute. Leonard's adventures along with the human frontiers of the 1960s are described in his 1988 memoir, Walking on the Edge of the World. He was married to the artist Annie Styron Leonard, and left, in addition to his wife, three daughters and six grandchildren.

George Leonard has been called "the granddaddy of the consciousness movement," by Newsweek, "the poet-philosopher of American health in its broadest sense" by American Health, and "the legendary editor and writer" by Psychology Today. While serving as senior editor for Look magazine (1953-1970), he won an unprecedented eleven national awards for education writing. His coverage of the Civil Rights Movements (praised in the February 10, 2003 New Yorker) contributed to Look receiving the first National Magazine Award in 1968. His harrowing 7,000-mile journey around the Soviet border with photographer Paul Fusco just after the Berlin Wall went up provided the first reportage showing that the Iron Curtain was an actual barrier of barbed wire, mine fields, and watch towers rather than a mere figure of speech.

In a sense, Leonard discovered the Sixties. While other media were still decrying the silent or cautious generous, he produced a special Look issue called "Youth of the Sixties: The Explosive Generation" (Jan. 3, 1961) which foretold the idealism and turmoil to come. His special issue on California (Sept. 25, 1962) was the first to put forth the thesis (later adopted by all media and become conventional wisdom) that what happened in that state would happen later throughout the nation. In the 1960s, Look had a readership of 34 million and won more national awards for excellence than any other magazine.

Leonard coined the term "human potential movement" and first used the term "The Transformation" in a book of that title to describe a shift in the way industrial culture deals with matter and energy, organizes social forms, and shapes consciousness. His bestselling 1975 book, The Ultimate Athlete, helped shape the fitness boom. His 1983 book, The End of Sex (the cover article for the December 1982 Esquire and several other magazines) was the first published requiem for the sexual revolution.

His scenarios for the interactive multimedia education in Education and Ecstasy and Esquire are still considered state of the art by educational technologists. Dr. Alfred Bork of the Educational Technology Center at the University of California at Irvine has stated that "many of the features that Leonard describes seem to me likely to characterize almost any school of the future that uses computers effectively as tools for learning."

Leonard's more recent books, Mastery (1991), The Life We Are Given (1995, with Michael Murphy), and The Way of Aikido (1999) have helped create a nationwide movement towards long-term practice, as opposed to the quick-fix mentality. According to the San Francisco Chronicle, "Leonard has been right so many times about prevailing zeitgeists that you have to wonder if he has a third eye."

During World War II, Leonard served as attack pilot in the southwest Pacific theater, and during the Korean conflict, as an analytical intelligence officer. He also enjoyed a lifelong devotion to music and occasionally played piano with jazz groups. He wrote the music for two full-scale musical comedies, which were produced by the Air Force, and another, Clothes, based on "The Emperor's New Clothes," which was produced at Marin County's Mountain Play Theater.