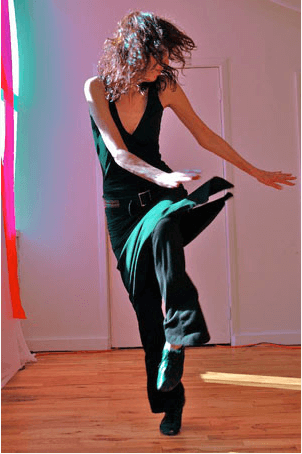 "Energy moves in waves. Waves moves in patterns. Patterns move in rhythms. A human being is just that, energy, waves, patterns rhythms. Nothing more, nothing less. A dance."

Gabrielle Roth was one of Esalen’s most popular and enduring workshop leaders. As a young dancer in her twenties, she arrived at Esalen in the mid-Sixties and within a short time was invited by Fritz Perls to teach movement to his Gestalt Therapy groups, and soon after began running the Esalen massage program.

Gabrielle had spent the previous ten years of her life teaching movement to children, elders, people-at-risk, and the disabled, and used her time at Esalen to further hone and develop what would eventually evolve into the worldwide 5Rhythms™ movement practice.

She would eventually migrate to the East coast, where she founded The Moving Center Inc., the vision and vehicle of her body of work. Over the years, Gabrielle’s unique perspective and passion stretched from the dance floor to the pages of three best-selling books: Maps To Ecstasy, Sweat Your Prayers, and Connections.

Based in New York City, Gabrielle also created a vibrant body of experimental theater work, and along with her husband, Robert Ansell, produced more than 20 percussion-based music albums.  Now an international institute, The Moving Center oversees the teaching of her work globally in 87 countries, and has certified over 300 teachers around the world.

She also created the 5Rhythms Reach Out, a non-profit foundation dedicated to bringing her work back to where it started over 50 years ago: to prisoners, inner city children, the elderly, and other special needs communities. (See http://www.5RRO.org.)

Gabrielle died at home surrounded by her loved ones on October 22, 2012, and is survived by her beloved husband and son, Robert Ansell and Jonathan Horan, who were and remain her partners on the 5Rhythms path. Jonathan and his sister Lucia Rose Horan continue to regularly lead workshops at Esalen and around the world.

The following poem of tribute was written by her friend and student of over three decades, Martha Peabody, poet and visual installation artist:

Gabrielle Roth was born and raised in the West and lived in the East and worked everywhere in between and over. Educated as a teacher she spent her life coming into her true calling…

She was a white woman with the soul of a black preacher man
A mother with a teenager’s heart
A dancer with a starving poet’s body
An anthropologist with a silver shovel gaze
A loner who attracted crowds
A healer who wrote prescriptions with her feet
A survivor of an ancient wisdom cult held in modern rock & roll
A wanderer obsessed by maps
A witch shaman warrior priestess guru mistress drinking red wine at the table next to you
She was the softest black leather trench coat with ballet shoes as a belt
She smelled like all your best memories
and could point to the core of your most vivid nightmares.
She was shy and nothing and everything scared her.
Fierce and fragile she’d stand-up-comedian trick you into the deepest wholes
of yourself then saw this unraveling as art.
She believed in the physical power of motion, the wisdom of gravity,
The emptiness of true love, the fact that there is no way out but thru the body,
No way up unless we all go together, no way down unless we follow the beat,
and no way in unless we embrace the dark.

She was the darkest shadow of the brightest light.
Into this soft dark she slid
dancing free
now and forever