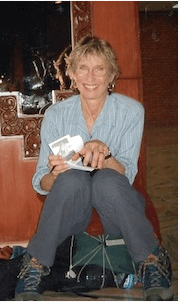 A Tribute by Stanislav Grof

‍
During the almost 40 years when Christina and I lived and worked together, we experienced many extraordinary adventures in various non-ordinary realities, as well as crisscrossing the globe doing our work on all the continents except Antarctica.

Wherever we were in the world, Christina was able to form close and warm connections with local and indigenous people. She also used everywhere her special talent for creating a beautiful and warm environment that made us feel at home whether we stayed in modern hotels or aboriginal cottages.

Christina belonged to the rare breed of people who walk their talk. Spirituality was not something that she reserved for her lectures, workshops, and books; it constantly penetrated her entire life, including the most mundane everyday activities.

She did not miss an opportunity to start conversation with little children in parks, people walking dogs in the street, or employees checking-out merchandise in grocery and department stores. She usually found something beautiful about them to make a compliment about.

But her special attention belonged to homeless people. Being aware – on the basis of her own experience - of the menaces of alcoholism and addiction, she never gave these people money, but bought them a sandwich and fruit juice or took them for a meal in a restaurant.

She was also the major inspiration for our family trips on Thanksgiving Days and Christmas holidays to Glide Memorial Church to prepare and serve meals for the homeless.

As expected in an intense and complex relationship like ours, our spiritual journey in tandem took us occasionally into stormy waters, but cruising through life we hardly ever encountered doldrums and boredom.

Another important channel for Christina’s creativity was art and appreciation of beauty. Early in her career, she was a very gifted, resourceful, and original art teacher who cultivated and nourished in her pupils their natural talents. Later she became an accomplished painter who used art for pleasure, as well as an important tool in her healing process and self-exploration.

The remarkable collection of paintings documenting her journey of recovery from alcoholism served as a teaching device and source of inspiration for many people suffering from addictions who came to her lectures and our workshops.

Her extraordinary creativity and sense for beauty manifested in many everyday situations, such as exquisite setting of tables for birthdays, dinners for friends, Thanksgiving Days, Christmas, and Easter.

Over the years, our collection of handmade decorations has reached a size that exceeds the capacity of our trees to hold it. All Christmas gifts came with intricate wrappings and cards with puzzles alluding to what was inside of the boxes. And Christina’s specialty for all different occasions was creating beautiful flower arrangements.

One of the powerful forces in Christina’s life was her unconditional love for her daughter Sarah, son Than, daughter-in law Deborah, and five wonderful granddaughters. It was very interesting to witness the ingenious ways in which she was able to lead her children and grandchildren lovingly to desirable behavior without using disciplinarian method.

The best examples were the promise of Children’s Day that she introduced to Esalen and of “messy meal” during which the children were allowed to be as wild as they wanted if they behaved at the table all the other times. Christina’s captivating stories and imaginative plays worked wonders with the children. Our family gatherings were always full of laughter, jokes, and little tricks.

Christina’s preparation for Christmas did not start with Thanksgiving Day, but extended throughout the entire year. The intention to find the best gifts for the members of the immediate and extended family always permeated all her shopping.

I feel deep appreciation for the role Christina played in my life directing my attention to various areas in which I would not have otherwise been interested. On her 50th birthday, Than, Sarah, and I created for her a rite of passage that took her blindfolded to a boat on the San Francisco Bay for a dinner with our transpersonal friends.

After we took the blindfolds off her eyes and our friends revealed their faces hiding behind Victorian masks, it was time for birthday wishes. In his brief speech, Roger Walsh said something that I believe best characterized Christina’s role in this lifetime: “I do not know any other person who has been able to transform major problems in his or her life into projects that serve humanity.”

And this certainly was true. Christina’s psychospiritual crisis, which took the form of Kundalini awakening, motivated her to found the Spiritual Emergency Network (SEN) and inspired our two books The Stormy Search for the Self and Spiritual Emergency. These books have been translated into many foreign languages and instigated a large number of studies and books on this subject.

The concept of “spiritual emergency” has been accepted by the transpersonal community and has been very useful for many hundreds of people undergoing spontaneous episodes on non-ordinary states of consciousness. SEN has filial branches in many countries.

Christina’s bout with alcohol and the process of her recovery inspired an Esalen month-long seminar and two International Transpersonal Conferences entitled Mystical Quest, Attachment and Addiction.

These events were an attempt to integrate the practically successful approaches of the Twelve Step Programs and the theoretical understanding of spirituality offered by transpersonal psychology into a comprehensive therapeutic program for combating alcoholism and drug addiction.

Shortly before her death, copies of Christina’s last book The Eggshell Landing was delivered to our Mill Valley home. This was the last of the projects that Roger Walsh referred to in his talk on Christina’s 50th birthday.

This autographical novel, set into the beautiful environment of Oahu, the Hawaiian island where Christina grew up, is a story describing the most painful psychotrauma of her childhood – emotional and sexual abuse by her stepfather extending over a long period.

She succeeded in resolving this trauma, which poisoned her entire life, in a remarkable and very unusual way. When he was dying of metastatic melanosarcoma and showed signs of regret for his behavior, she decided to take care of him in his dying process.

The two of them were able to find reconciliation and spiritual closure of their most difficult relationship.

During my travels in the last three years, I have already heard from many participants of my lectures and workshops how much Christina’s book had helped them in dealing with their own history of sexual abuse.

Christina and I cooperated on many projects – from our early psychedelic training sessions for the staff of the Donwood Institute in Toronto, Canada, through 30 Esalen month-long workshops, and a number of International Transpersonal Conferences to the development of the concept of “spiritual emergency” and of the method of Holotropic Breathwork, including workshops and training worldwide. Our cooperation was close and it was not always easy to separate our individual inputs from each other.

Unfortunately, because we live in a patriarchal society, Christina often did not receive any credit for projects that she had created single-handedly such as founding the Spiritual Emergency Network (SEN) or bridging between the addictions field and transpersonal psychology, as well as those to which she made substantial contribution, such as Holotropic Breathwork, Esalen month longs, and International transpersonal conferences.

This was further complicated by the fact that in later years low energy due to her chronic autoimmune disease did not allow her full participation in many of the events. Witnessing Christina enduring for a significant part of her life immense back pain patiently and without complaints was for me an invaluable lesson in compassion.

Because of her modesty and humility and in spite of major appreciation that she received from our workshop participants, trainees, readers of her books, and professional colleagues (including two honorary Ph.D. degrees), she did not realize the extent to which she positively influenced and even transformed thousands of human lives.

I will certainly remain grateful for everything she contributed into my life. In spite of all the hardships and challenges that we encountered on the way, it was a rich and extraordinary journey that deeply influenced my life.

Born in Roanoke, VA, and raised in Honolulu, HI, Christina Grof was a graduate of Sarah Lawrence College, where she studied with mythologist Joseph Campbell and poet Muriel Rukeyser.

A mother and wife, she was a former teacher of art, writing, and Hatha Yoga. For many years, she was also a student and devotee of Swami Muktananda Paramahamsa, head of the Siddha Yoga lineage.

After 11 years of marriage, she divorced her husband Winston Healy, principal of the Honolulu Punaho School, and moved to California.

From 1975 until 1988, Christina was in residence at the Esalen Institute in Big Sur, California, where she and her husband, Czecho-American psychiatrist Stanislav Grof, coordinated and led a series of 30 experimental month-long educational programs, as well as five-day and weekend workshops.

In 1976, she started teaching, lecturing, and conducting workshops on various topics of transpersonal psychology in North, South, and Central America, Australia , India, Japan, and a number of European countries.

Motivated by her own transpersonal crisis (“spiritual emergency”) that took the form of Activation of Kundalini, she founded in 1980 at the Esalen Institute the Spiritual Emergency Network (SEN), an organization helping people in psychospiritual crisis to avoid psychiatric stigma and find alternative treatment.

The concept of “spiritual emergency” has benefitted hundreds of people and the SEN has over the years developed filial branches worldwide. Christina and her husband Stan co-authored two books on this subject, entitled Spiritual Emergency and The Stormy Search or the Self.

After her 8-year battle with alcohol, Christina became very active in the alcoholism and addictions field. She wrote an influential book on the relationship between spirituality and addiction entitled The Search for Wholeness and inspired and coordinated an Esalen month-long workshop and two large conferences of the International Transpersonal Association (ITA) that all shared the topic The Mystical Quest, Attachment, and Addiction (in Eugene, OR, and Atlanta, GA).

It was an attempt to create a comprehensive treatment program for alcoholism and addictions by bringing together the Twelve Step Programs with their success in treating addictions and transpersonal psychology legitimizing spirituality by bringing for it scientific support.

She taught at professional training programs in the United States and Europe, and training sessions for the staff at Sierra Tucson, an addictions treatment facility in Tucson, Arizona. In her last few years, she focused on writing and lecturing.

Christina is the author of The Thirst for Wholeness: Attachment, Addiction, and the Spiritual Path, the auto-biographical memoir The Eggshell Landing: Love, Death and Forgiveness in Hawaii; Spiritual Emergency: When Personal Transformation Becomes a Crisis; The Stormy Search for the Self: A Guide To Personal Growth Through Transformational Crisis; Beyond Death: The Gates of Consciousness; and Holotropic Breathwork: A New Approach to Self-Exploration and Therapy (the last four are co-written  with her husband)

These books have been translated into many languages. Some of Christina’s published articles have appeared in Crossroads: The Quest for Contemporary Rites of Passage (Louise Mahdi, Nancy Christopher, and Michael Meade, Eds., Open Court, 1997), Common Boundary, the Re-Vision Journal, the Spiritual Emergence Network Journal, Lotus Journal, and Honolulu Magazine.

Christina was interviewed on a number of radio and television stations nationally and internationally and was the subject of many videos and newspaper and magazine articles.

At the time of her death, she was working on a book of her paintings.