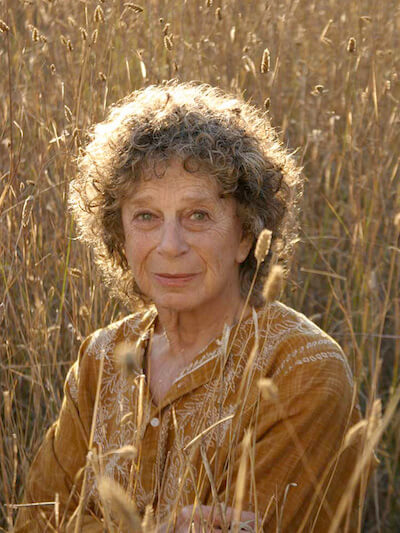 "As we tap into the deep sources of bodily wisdom through creative art expression, we dance the renewal, recreation and healing of ourselves and our world."

In the 60’s at Esalen, Anna would meet with Fritz Perls, M.D., founder of Gestalt Therapy. She told me Fritz was “one of the greatest influences of my life…”. She didn’t “know how to cope with negative systems… the positive was easy…didn’t have the tools to cope with the negative…”.  Fritz gave her those tools, and their influences on each other changed the trajectory of psychology, dance education and theater.

At Esalen, on sacred land, center of the Human Potential Movement where searchers and researchers of health and truth from every field came to learn and grow, Anna and Fritz sought authenticity, as did so many others. In his groups, Fritz observed that the unconscious mind had a closer affinity to images than to words. He kept focus on images evoked by personal stories and so increased associated  emotions. This was of foremost importance. Giving voice to those emotions, seminarians could become aware of new and different perspectives leading to emotional changes. Anna took Fritz’s image work to the next level. Instead of starting from words to images, Anna started from movement and captured body-based images realistic or abstract and words on paper where visible exploration of inner and outer worlds could be mapped.

Anna is the mother of Embodiment in the Human Potential Movement. She proved through countless successes that psychological reality is deeply rooted in the processes of the body. It is educated, meaningful, moving bodies that lead us to understand our most authentic selves.

She knew how the human body moved as well as anyone on the planet. She studied ballet, modern dance forms, tai chi, yoga. She developed her own approach to dance, studying functional anatomy and kinesiology  from Margaret H’Doubler. Anna was friends with  Moshe Feldenkrais and steeped in the Alexander Technique. She developed a process-oriented series of movements which can guide bodies through all (sic) human movement. Movement Ritual 1 (MR1) is on the ground, MR2 moves through space, and MR3 develops out of those orientations and are highly personal or communally creative. Movement Ritual experiences are the physical, functional movements of your body paying attention to your senses, feelings, mind, metaphors and images. When deepening further the mind/body experience, Anna incorporated  Fritz’s Gestalt ‘Direct Dialogue’ — giving a shareable, understandable voice to different body parts and in association with each other in their environments.

Anna and her husband, Larry, the renowned landscape architect, were extraordinarily creative together. Exploring relationships among people, communities and the arts, they uncovered how creativity itself works. The Collective Creativity Cycle is process and action oriented, and is also known as The RSVP Cycles — for Resources, Scores, Value-action, and Performance. They consist of four simultaneously interacting parts which give rise to new wholes. It is applicable to any situation. Anna used it to facilitate communal and personal dances. Here are the museum dances, Palestine-Israeli women dances, City dances, the Trance Dances and those dances that bring people together to heal. Larry told me that among many other artists who worked with the Collective Creativity Cycle, he worked with John Cage and Salvador Dali. Fritz loved it, he said, goals can be impossible while “...scores face the possible.”

Learning from Fritz, whom Dick Price described as a confrontational Gestaltist, Dick and Anna were what Dick described as “Aikido” Gestaltists. They provided supportive, non-judgemental ways to share their own and other participants' emotional reactions and perspectives, thereby providing safe space for acknowledgement, validation and discovery of new Resources. Using the RSVP Cycle, Anna and her daughter Daria co-founded the Life/Art Process. It, like Fritz’s philosophic Gestalt framework, can accommodate any technique and the arts. ‍

“Going to Esalen was a special time for Anna. She loved being in the environment,  being with the community. When she began having grandchildren her focus shifted on the opportunity to bring them to Esalen … to experience the teachings at Gazebo … to experience the magic of the famous Esalen Gardens.”

Anna believed in the basic goodness of humankind, in using the powerful forces of nature, community involvement, movement as a healing art, searching to bring parts to whole for the betterment of everyone. Fritz and the community set the scene for her to develop the tools she needed to cope with the negative systems of life and to share those tools with the world. She developed for herself and for generations to come a universally applicable map for authenticity and creativity, for communicating, and together harnessing life-giving forces.

Esalen goes on as  a place of seekers who come together to share, to learn, to struggle and to rest. Rest, Anna and know you changed the world for the better. Rest now, your work goes on.

‍Dianne Miller studied Collective Creativity and the Life/Art Process with Anna and Larry Halprin, and Gestalt with Dick Price for decades, working as an Esalen in-house facilitator for over fifty years.